This website uses technical, analytics and third parties cookies to get statistical data processing and quality control, and to allow you to share information with social networks. Please note that if you use the functions that interact with social networks, these could track your navigation with their cookies. To learn more on all our cookies, how to disable them or deny your consent, please read the privacy policy.

You have declined cookies. This decision can be reversed.

Lake Erken is a moderately eutrophic lake located in east-central Sweden near the Baltic coast (59.8 N 18.6 E).  The lake has a surface area of 24 km2, an average depth of 9 m, a maximum depth of 21 m and a water residence time of approximately 7 years.  The Lake has been the site of Uppsala University’s limnological field station for nearly 80 years, where a large variety of research covering all aspects of limnology have been carried out.  The field station was first established in 1944, and later followed by the addition of a research Laboratory on the lake shore, and a small meteorological station on an island offshore (Fig. 1).

+
Figure 1 - Lake Erken and its watershed. The bottom shows the location of the automated monitoring systems that are operational on the lake.

This meteorological station on Malma Island, completed in 1958, was one of the first developed to support limnological studies.  In addition to standard meteorological measurements of wind solar radiation and air temperature, a stilling well was installed to allow continuous monitoring of lake level, and underwater thermistors were installed to automatically monitor water temperature.  Originally, all data were collected on paper charts and these were transcribed to produce daily summary statistics.  Between 1987 -1988 the meteorological station measurements were converted to record data digitally, and measurements made at 1 min frequency were summarized and saved at hourly and daily time intervals.  During this time a water temperature monitoring system was also established at the eastern end of the main basin of the lake at a depth of 15 m.  Measurements at 0.5 m intervals made at this station allow detailed analysis of the lake thermal structure and supplementary measurements of wind speed close to the water surface.    Water discharge is measured entering the lake from the largest input at Kristineholm, and the lake outflow discharge is measured at Stensta.  At Kristineholm the inflow concentrations of dissolved organic carbon (DOC) are estimated by monitoring the fluorescence associated with DOC in the inflowing stream water. In 2014 the Erken laboratory joined the SITES (https://www.fieldsites.se/en-GB) research network and as result of increased funding and support was able to further increase the automated monitoring program to include a YSI profiling system that collects hourly profiles of dissolved oxygen, turbidity, pH and fluorescence measurements of phytoplankton, chlorophyll, cyanobacteria phycocyanin  and DOC . Automated lake monitoring from Malma Island and other sites (Fig. 1) continues to this day (http://130.238.87.115:8080/Erken4/index.html).  Lake Erken joined the GLEON lake monitoring network (http://www.gleon.org/) in 2007 and has one of the longest data records of the GLEON sites. 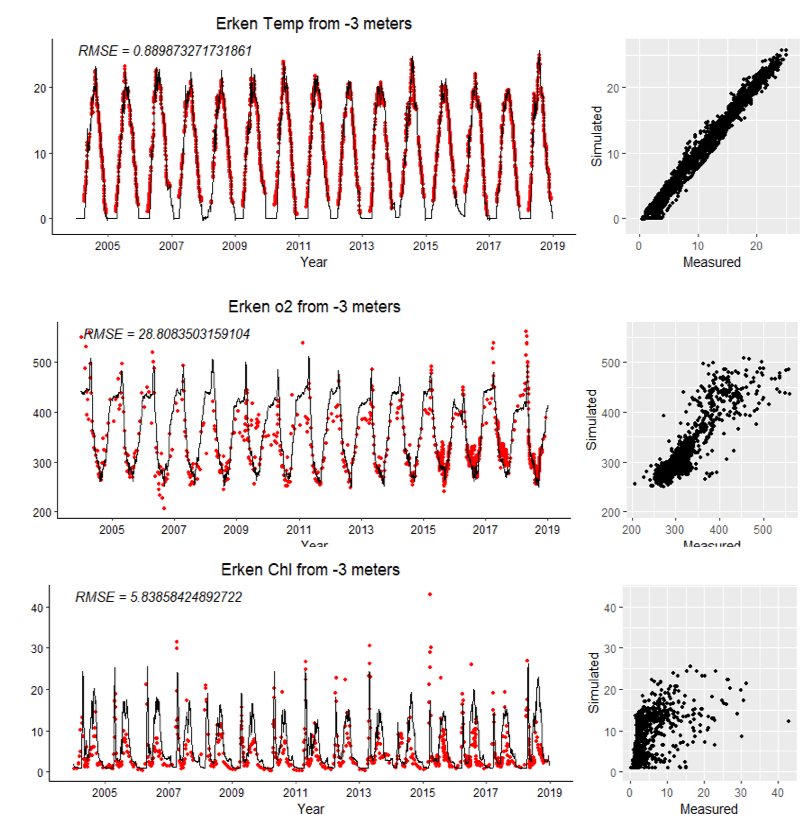 Since 1991 a consistent (1-2 week) monitoring program has been carried out using traditional methods of water sampling and analysis. Water samples collected from the lake are analyzed by Erken’s certified water quality laboratory for all major nutrient concentrations, dissolved oxygen, chlorophyll concentration and microscopic counts are made of phytoplankton abundance. Combined these data sets provide a valuable resource for model testing and development. An example of model simulations of lake water quality that are calibrated using data from Lake Erken’s monitoring program is given in Figure 2.

You have allowed cookies to be placed on your computer. This decision can be reversed.