Lake Castreccioni is a lake created in the 1980s when a dam was placed across the Musone River near Monte San Vicino, at about 70 km far from the coast.  The biggest artificial lagoon in the Marche region (Central Italy), Lake Castreccioni covers about 2.4 km2 and reaches depths of 55 feet.  The dam (67 m high and 280 m long) is situated on a homogeneous calcareous-majolica formation (Upper Jurassic-Lower Cretaceous) belonging to the prevalently limestone unit of the Umbro-Marche sequence. The volume of the lake at the maximum altitude is approximately 50 million cubic meters.

The potabilization plant (Acquambiente Marche) is located near the district of Castreccioni in the municipality of Cingoli and is responsible for drinking water for the member municipalities: Cingoli, Filottrano, Numana and Sirolo. Furthermore, through the Castreccioni pipeline, the treated water also supplies the Municipalities of Osimo and Castelfidardo.

Acquambiente Marche has the purpose of treating and drinking water from the reservoir of the Castreccioni dam from which it is fed by gravity through the intake present in the dam body. The plant represents the center of the activities of Acquambiente Marche both for its strategic importance, supplies water for a total of about 65,000 inhabitants in the winter and about 95,000 in the summer, using technologically advanced and equipped of an advanced ozone disinfection system.

The drinking water plant was started in 2000 and over the years has treated about 140 million cubic meters of water. The maximum capacity is 500 l/sec divided on two equal lines of 250 l/sec. The flow of treated water is a function of the needs of the distribution network and is accounted for both influent and effluent. The process steps are: Pre-disinfection with ozone (pre-ozonation), clariflocculation, sand filtration, disinfection, ozonation, activated carbon filtration, accumulation tanks and final disinfection with chlorine dioxide. There is also accessory equipment thanks to which the chemical and physical parameters such as temperature, turbidity, pH, conductivity, dissolved oxygen for raw water or pH, nitrite conductivity and active free chlorine for the treated water and aluminium and ozone in intermediate samples are continuously determined. The variability of the organoleptic and chemical characteristics of the water coming from the Castreccioni reservoir obliges the Company to continuously and dynamically manage to promptly intervene in all cases in which unfavourable interventions occur under the conditions of the drinking water process also in case of cyanobacteria concentrations in the influent.

Based on the monitoring campaign by ARPAM conducted since 2014, it is concluded that:

P. rubescens can produce numerous types of toxins (microcystins) with a hepatotoxic, gastroenteric and carcinogenic value. Since one of the possible means of the migration of these toxins is drinking water, Acquambiente monitor the concentrations of these substances in the distributed water through periodic analyses. 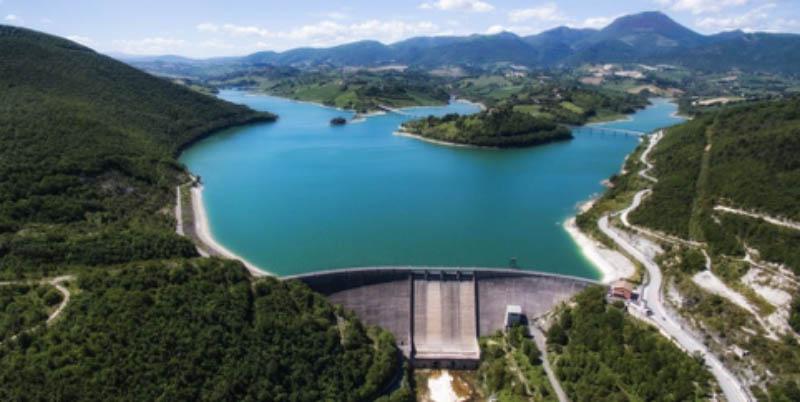 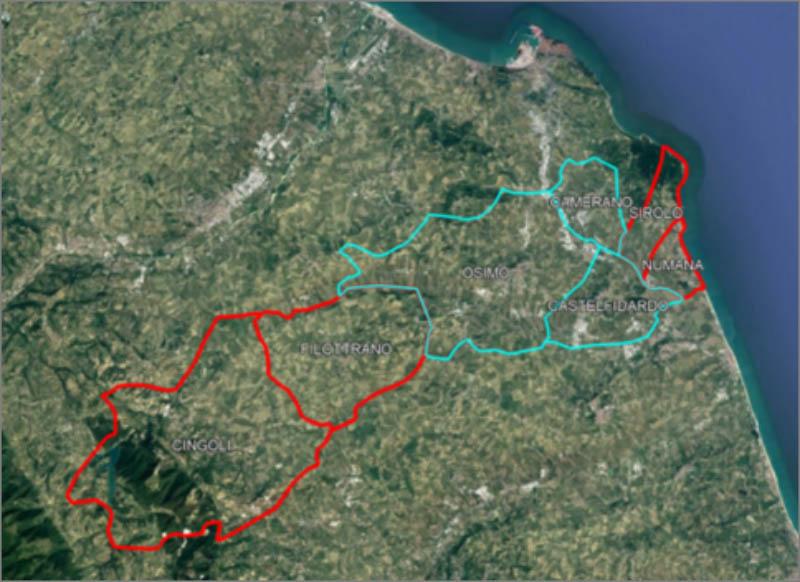 +
Fig. 2 - Basin of the municipalities through the Castreccioni pipeline.